You are here: Home

Oystercatcher with flag from Kamchatka

Oystercatcher with flag from Kamchatka

A flagged Oystercatcher was observed in Gonushi Beach, Matsuzaka, Mie on October 2019. This area is on the western coast of Ise Bay. Another flagged Oystercatcher was observed in Sanbanse, Funahashi, Chiba on September 2019. The latter is in Tokyo Bay. These two areas are known as the wintering sites of this shorebird in Japan.

These Oystercatchers were ringed and flagged at the nestling stage in the estuary of Khairusovo, Belogolovaya River in central Kamchatka on July 2019. 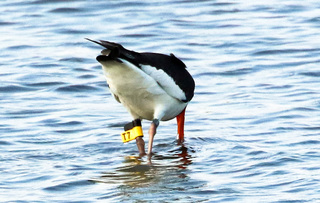 Two know the precise number of wintering Oystercatcher, the Wild Bird Society of Mie continue a simultaneous count project from December 2014 along western seashore of Ise Bay. It covers about 60 km of the shoreline. Recent figure shows that more than one hundred Oystercatchers winter in this shoreline.