You are here: Home

Our society was founded in 1971 as an independent society under the name of “Mie Yacho-no Kai”.We then joined the Wild Bird Society of Japan in 1993.

Our journal “Shirochidori”, which means Snowy Plover, was first published at that time, and is now published four times per year in full color. About 50 bird watching meetings are held every year. We also join the national bird counting projects on waders, ducks, and cormorants.

In addition, we recently started an oystercatcher count project, which covers the whole western coast of Ise Bay. Joining with two other organizations in Aichi, we periodically survey the breeding of Eastern Harrier in Kisozaki Reclaimed land.

About our area and its bird fauna 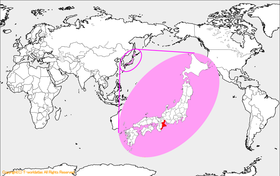 Mie Prefecture is almost in the center of Japan, facing the Pacific Ocean and Ise Bay. In the northern mountainous area, the Suzuka Mountains have much snow precipitation in winter because of the winter wind from Siberia. These mountains are covered by deciduous or mixed forest, and are rich in mountainous bird fauna.

Blue-and-white Flycatcher, Narcissus Flycatcher and Japanese Thrush are common summer visitors. Wren warbles in early spring along stream. Copper Pheasant lives in this mountain. One pair of Golden Eagles has its territory around Mt Fujiwara, in the north of the Suzuka Mountains. In contrast low altitude areas are warm, and the natural vegetation is evergreen forest, although most of the areas are cultivated for rice and other crops. Brawn-eared Bulbul, Bush Warbler, Meadow Bunting are residential and common. Little Egret and Great Egret are residential in paddy fields and rivers. In contrast, Intermediate Egret and Cattle Egret are summer birds.  In winter, Pale Thrush, Black-faced Bunting, Rustic Bunting, Reed Bunting, and Long-tailed Rose Finch come and overwinter.

The northern half of the shoreline of Mie is facing Ise Bay. Some of the shoreline still remains as natural sandy shore, and has natural coastal vegetation and rich bird fauna. Sanderling and Dunlin visit and stay on the sandy beach, while Snowy Plover makes nests and raises chicks on the shore. We have some tidal flats in this area where many migrating waders visit and stay. Whimbrel, Tattler, Greenshank, Terek Sandpiper, Rufous-necked Stint and other waders visit and forage in this area.

The southern coastal line facing the Pacific Ocean has rocky cliffs and arms of the sea. Reef Heron is sometimes found on the float for fish cultivation. Osprey dives for big fish. A small number of Peregrine breeds in this area. Uninhabited Islands off Kiinagashima are an especially important area. Rare bird species, Japanese Murrelet, Streaked Shearwater, Japanese Wood Pigeon, and Pleske’s Grasshopper Warbler breed in these Islands. The area is protected by the Japanese Government, and landing on these islands is not allowed except for research and conservation purposes.

A large part of middle and southern Mie is mountainous. These mountains are covered by planted conifers and some natural forest. Hawk Eagle breeds in this area. Its territories are sometimes threatened by road construction or windfarm construction. A small owl, Scops Owl, lives in this area. Its three-syllabled song can be heard on summer nights. The Oodai Mountains, the southwest of Mie, has extraordinarily high precipitation. The summit is ca. 1600 m. Unfortunately, the breeding population of Golden Eagle is now extinct. The above mentioned various mountain bird species are also found in this area. In addition, a bird species in high altitude, Nuthatch, has been recorded. Recently no detailed survey has been done in this area, because climbing trails are lost by heavy rain.